However, in international taxation, two principles guide the application of VAT on cross-border transactions and define the allocation of taxing rights amongst countries that are engaged in such transactions. These principles are the “Origin Principle” and the “Destination Principle”. The Origin Principle states that each country will impose VAT on the value created within its own borders. This essentially means that exporting jurisdictions would impose VAT on their exports.

On the other hand, the Destination Principle allows for the imposition of VAT in the countries of import where the goods and services are consumed. This principle is favoured in international trade as it inherently protects the tax/revenue base of developing countries that create less value within their borders and rely heavily on import taxes as a major source of government revenue. The Nigerian VAT Act appears to favour the Destination Principle given that it specifically exempts all exported goods and services from VAT, while specifically omitting imported goods and services from the list of VAT-exempted items.

However, the extent of application of these principles and the Nigerian VAT to cross-border transactions, more particularly on “imported services” defined in the VAT Act as “service rendered in Nigeria by a non-resident person to a person inside Nigeria,” have resulted in several disputes and continues to generate controversy between the taxpayers and the administering tax authority, the Federal Inland Revenue Service (FIRS). Some of these disputes have culminated into court actions, notably the case of Vodacom Business Nigeria Limited Vs. FIRS, Appeal No: CA/L/556/2018 delivered by the Court of Appeal on 24th June, 2019. This case is the focus of this article.

The facts of this case are depicted in the schematic below: 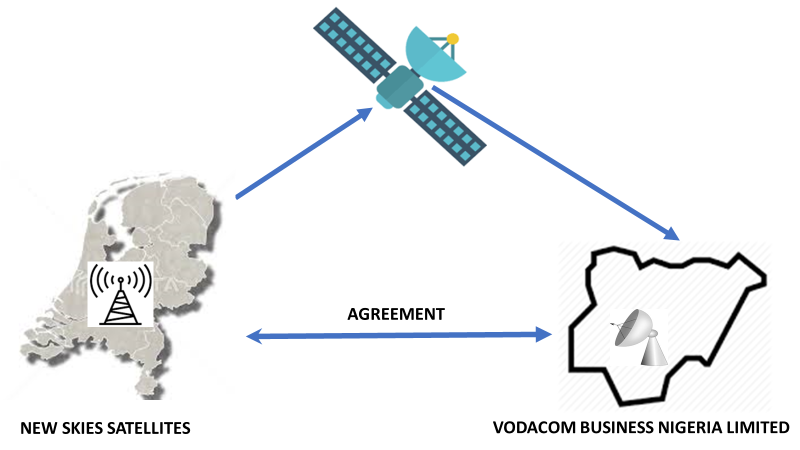 The parties’ case and the decision of the Court of Appeal can be summarised as follows:

i. Whether the bandwidth capability supplied from offshore to a person inside Nigeria by a non-resident service provider was liable to VAT if the service was not physically rendered in Nigeria as well as whether NSS carried on business in Nigeria:

The Court of Appeal, in its judgement, held that section 2 of the VAT Act is clear that except for the goods and services listed in the First Schedule to VAT Act, VAT is payable on the supply of all other goods and services that are not specifically exempted in the law. In the instant case, the service provided to the Appellant by NSS does not fall within the goods and services listed in the First Schedule to the VAT Act. As such, it is not VAT-exempt. The court went further to hold that even though the satellite is in orbit, the supply of services from it is rendered in Nigeria as its physical presence in Nigeria is of no importance given that the nature of the services rendered in Nigeria were such that physical presence was unnecessary. Furthermore, the court held that in so far as the bandwidth capacities are supplied in Nigeria, the foreign company carried on business in Nigeria, within the meaning of section 10(1) of the VAT Act, since its services supplied to the Appellant (i.e. the bandwidth capacities) are used in Nigeria.

The Court of Appeal held that where there is a failure to include VAT in an invoice, it does not bring to an end the liability to remit the VAT, which has already kicked in by the stipulations of section 2 of the VAT Act, which mandatorily requires that VAT is to be charged and paid on all goods and services except those listed in the First Schedule to the Act.

iii. Whether the Federal High Court erroneously applied the Reverse Charge and Destination Principles which are not recognised under Nigerian tax laws to this case. Reverse Charge mechanism is a tax mechanism that switches the liability to collect and pay VAT from the supplier (i.e. NSS in this case) to the consumer (the Appellant). It is FIRS position that these principles are provided/implicit in the VAT Act while Vodacom argued otherwise:

The Court of Appeal held that even though the phrase Reverse Charge is not mentioned in the VAT Act, it appears that the philosophy behind it which requires the person to whom the goods or services are supplied, to be the person to remit the tax is captured in the law. However, the appeal court considered the Destination Principle from the perspective of whether it was a basis the Federal High Court relied upon in reaching its judgment (rather than whether it is recognised in the VAT Act) and held that same was not specifically applied by the lower court.

Implications of the Decision on Businesses and Recommendations for Risk Mitigation

The decision of the Court of Appeal is generally consistent with the internationally-acceptable Destination Principle that seeks to tax the domestic consumption of imported goods and services as against the Origin Principle that places emphasis on the taxation of domestic production.

However, based on the factual circumstance of this case in which bandwidth capacities where supplied from a satellite in the orbit and received by the Appellant in Nigeria without the physical presence of the service provider in Nigeria, the court seems to shy away from the Appellant’s contention, which is hinged on the definition of “imported service” that the physical presence of the foreign service provider in Nigeria is an important consideration in determining the VATability of the transaction in Nigeria. Rather, the court based its findings on whether the services were indeed supplied in Nigeria. Accordingly, this may form a potential ground for the Appellant to challenge the decision in the Supreme Court.

Notwithstanding the foregoing and pending when the Supreme Court pronounces on the validity or otherwise of the decision (should Vodacom decide to challenge it at the apex court), taxpayers should note that the decision has a far-reaching implication on their businesses. Hence, we will advise they should take into cognisance the implication of the decision when conducting their business affairs with their foreign counterparts. Therefore, the following implications and risk mitigation strategies are worth mentioning:

ii. The Nigerian companies mentioned above are advised to conduct risk checks on their current and past transactions (particularly transactions dating back 6 years of FIRS audit cycle) to ascertain whether there are incidences of non-compliance with the disputed provisions of the VAT Act on imported services. Where any risk is identified, then the taxpayer should as a matter of utmost importance enter into an arrangement with FIRS to offset the resulting liabilities and possibly avoid payment of interests and penalties that should ordinarily be payable if such transactions were discovered by FIRS themselves;

iii. It is also advisable that taxpayers should consider inserting suitable tax indemnity clauses in their cross-border contracts with non-residents with a view to protecting themselves in the event of any default on the part of their foreign counterparts in fulfilling their tax obligations, which FIRS may seek to recover from the Nigerian taxpayer.

Detail Commercial Solicitors is distinct as Nigeria’s first commercial solicitor firm to specialize exclusively in non-courtroom practice. Based in Lagos, Nigeria’s business capital, DETAIL is totally committed to its clients’ business objectives and reputed for dealing with the minutiae. Email: info@detailsolicitors.com